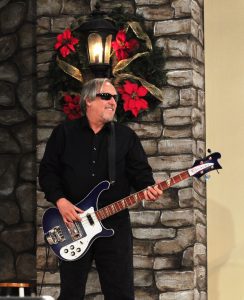 Dan playing with the Roaring Glories in Colorado Springs, Colorado.

Dan retired from IBM after 31 years, having spent his career in service, software development, marketing and sales.

As a new believer in 1998, Dan had a lot of questions about his new-found faith that were usually met with the response “well, I don’t know, I just believe.” As a physics/math major in college, he found this answer came up short and a desire was birthed to be able to give a better answer for his beliefs. As he continued his walk, he spent years studying the Bible before beginning the pursuit of education in Christian apologetics. In 2012 he began the development of an introductory course on the subject, which was piloted in the summer of 2013. He is now working on a curriculum for students that will eventually contain 96 lessons, or four years of training in apologetics, worldview, theology and bibliology.

He holds the following academic and professional memberships: