A Review of Relational Apologetics by Mike Sherrard 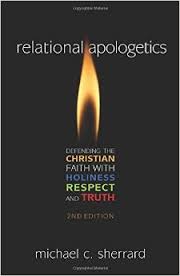 As I began this book, I had high expectations due to the title. Apologists can be somewhat aloof and non-relational, which can be detrimental to sharing the knowledge they possess. I’ve long believed that often times we, as apologists, miss the last part of 1 Peter 3:15 that we are to be prepared to give an answer with gentleness and respect. This implies we first and foremost engage in our craft relationally.

Mike Sherrard gets it. His book flows from identifying who we are, what we do, what we know and where we should go. At times, it is not an easy read and I would be inclined to give it four stars because of that fact. That was until I got to chapter fourteen.

Mike’s first words in this chapter is “Will you go?” The name of our ministry is I Will Go Ministries, based on Isaiah 6:8, so naturally, I was drawn more closely to the topic of the chapter. In this chapter, Mike encourages us to go. He models his call after the acts of the apostle Paul in Acts 17. Paul went. He eventually found his way to Athens, the heart of intelligentsia in the ANE. “Many came to believe” was the result of Paul’s reasoning with them where he met them as he went. Mike continues in the remaining chapters addressing the importance of going to the home and the church. How do you “go” to your home and the church? Read the book. Because of the wisdom and excellent manner in which Mike presents the arguments that we must go to defend the faith, and not merely wait for opportunities, this book is a must read for anyone interested in reaching those with shaky faith or even no faith. Buy the book. Five stars.

It was a divine appointment. The staff were told that they must wait until the students had eaten before they went through the serving line. So, today about 20 minutes after the start of lunch I went into the dining hall to get lunch. I sat across the table from a young man attending Summit who had just completed his first year at the university.

Summit advertises (loosely) that they make world leaders. When you see where their graduates serve, it becomes clear this is not an empty claim. The student I enjoyed spending an hour with at lunch is clearly one of these world leaders in the making.

Gunner shared an account of a required class at his university called “First Year Experience.” It was a required course (more about that later) which sought to help students navigate their way through their first year of college. Gunner was not so kind when he said it was nothing more than indoctrination. The first warning sign came with a questionnaire the students were required to fill out which was reminiscent of the scene in God’s Not Dead, where the professor encourages (requires?) the students to fill out a blank piece of paper with the words “God is dead.” This questionnaire asked the students various worldview questions and Gunner dutifully filled it out with his answers as someone coming from a Christian worldview. Sadly, he found out that several questions regarding sexuality and other similar topics did not allow for “no” answers and his grade was reduced accordingly. When he challenged the professor, she told him he could pick up his grade later.

It got worse. Next on the schedule was how to reduce stress in a college environment. This was done by inviting a guru to come in and teach transcendental meditation while chanting a few names of the various Hindu gods. Gunner was outgunned (pun intended) again when he asked when they would have a Christian come in to speak. No plans to bring in a Christian. No plans to bring in anyone else, for that matter.

It got worse. But in the interest of time, let me share what this young man did. While most of us may have been inclined to suck it up and move on, this was not an option for Gunner. Another professor, his English professor, had a writing assignment where the student could write on the topic of his or her choice. With his professor’s encouragement and permission, Gunner wrote on why the “First Year Experience” class should 1.) Be modified to become less biased toward one particular worldview and 2.) No longer be a required course for underclassmen. His professor told him if he did a good job on the paper, she would present it to the board. When his paper was returned, he received a grade of 105%.

It got better. Because of Gunner’s boldness and tenacity, upon the presentation of his paper to the university’s governing board, the content of the course was changed and it was no longer a required course. May every one of us have the conviction and boldness to change the world like Gunner. Amen.

Why apologetics is an important spiritual discipline for the church.

Here is an article by Dr. Alex McFarland that articulates the case for apologetics in the church. He states “Christian thinker G. K. Chesterton observed in 1933 that while it is important to win the unsaved to Christianity, leaders must increasingly endeavor to “convert the Christians to Christianity. Chesterton’s remark was a timeless reminder that the church must be ever dedicated in its duty to pass on biblical truth to rising generations.” The entire article can be read here.

We have finally made the switch to our new site and have shuttered our old site. While all of the information has not been added to this site, we expect to have this completed by the end of summer. We’ll have all of our resources and article on this new site by then. Thank you for your patience as we’ve made this switch!